I sped out of the house around eight o’clock as the sun had just set and found myself down at the Prom looking out over Tramore Bay.

It was one of those balmy September nights when locals and visitors were trying to eke out the very last of the Summer. The ‘Merries’ have closed down, on weekday nights anyway, but there was a big queue at Dooly’s Fish and Chip Shop which is a landmark place by the Ladies’ Slip here in Tramore. Even when you’ve had supper, it’s hard to resist at least a ‘small chip’ wrapped in steaming paper with that distinctive salt and vinegar smell that blends so well with the salty sea air and the splashing of the waves.

Tonight, the Prom seemed to be all about lines. The horizon was sharp, in stark contrast to the dense fog that hung over it early this morning; the waves were like dark pencil lines as they crested; the three pillars out at the Metal Man rose up to lend their shape to the scene; and most of all the Prom railings marked out Tramore as the place that has held me since I was a babe-in-arms.

Just to run my fingers along those railings anchors me like nowhere else. I’ve leaned against them in all-weathers for over half a century now and they always make me think of the millions of hands that have held them as Tramore has won the hearts of people who could be just about anywhere as I write.

It has been a day of many moods in and around Tramore today as Storm Frank passed through after a night of torrential rain and howling winds.

The Pier was barely recognisable:

Blue appeared and I had to chase it out the road to foamy Annestown Beach:

Roads and fields were flooded and my running place, The Anne Valley Trail, was out of bounds:

Dunhill Castle, high up on its hill, was probably the driest place in Co. Waterford. It has seen centuries of storms and floods and looked truly noble today:

This was the view from the window on the left on the wall facing us:

Garrarus Beach was pretty tossed up but had lots of new colourful rocks that had been unearthed by the storm.

And, as evening was falling, the sea was still wild and stirred up but it felt like everything was okay with the our little part of the world again:

All the while thoughts of the the old year and the new year were on my mind and this gate seemed to symbolise so much about closings and openings; endings and beginnings …..

December 21st is a HUGE day on my calendar as it marks the turn of the year in terms of daylight.

I was down the beach in Tramore watching the sunset at around 4pm and looking forward with glorious anticipation to the lengthening days that lie ahead.

The sunset was magical and it felt just perfect to be watching it on Tramore Beach looking towards the famous Metal Man.

My excitement was matched by the gathering and twittering of the birds on the lamps that adorn Tramore’s Promenade. 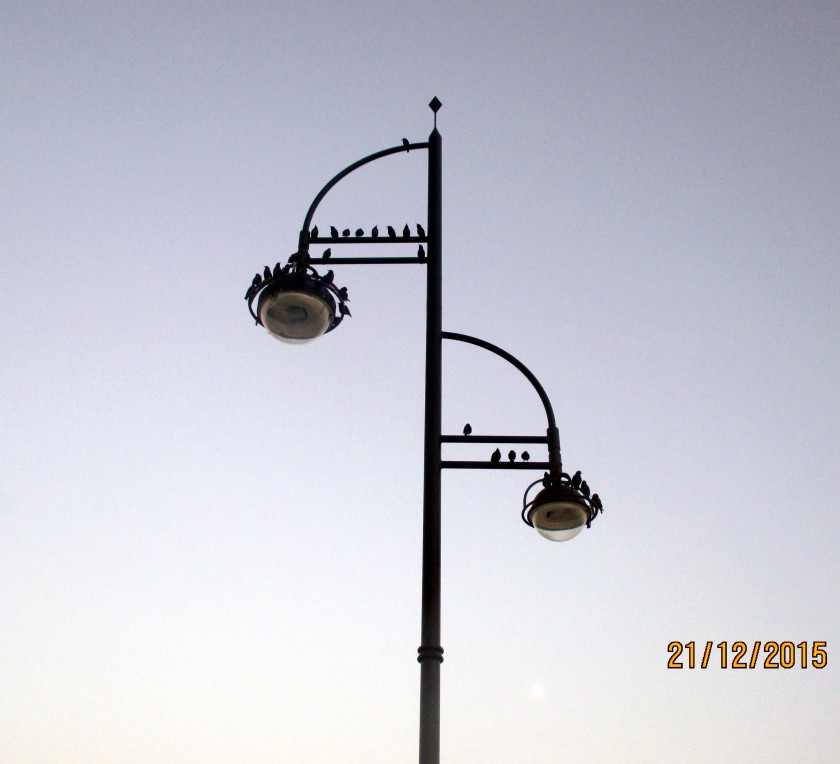 This was the delight that greeted me when I arrived back home to Tramore this morning after a very early and rather grumpy trip into Waterford City.

Today marks the 16th anniversary of the tragic crash of the Irish Air Corps Rescue Helicopter 111 in the sand dunes of  Tramore Beach, Co. Waterford in 1999.

As I walked down the Promenade here in Tramore early this morning, my thoughts were with the families, friends and colleagues of the four crew members who were killed on that dark, dark day in Irish aviation history.

The four brave men who died on their way home from a rescue mission in dense fog were:

These men will never, ever be forgotten by the people of  Tramore and there is intense goodwill and love for the Rescue Helicopter  and its crews, based at Waterford Airport,  which serve us all with such heart, altruism and skill.

But, today, let us remember, and give thanks to, those four young men who paid the ultimate price in the service of others.

The connections between Ireland and America are immense and I can’t but think of them when bringing you Rod Figaro’s contribution to The Festival of Bridges.

Rod is a professional photographer, based in New York, and you can find his excellent website here. Bridges feature a lot in Rod’s work and when I asked him about this he said:

As for my fascination for bridges, particularly the ones in New York, their sheer sizes alone can easily capture your attention, and one can never get used to that.

Here is the magnificent photograph that he sent me:

For years, as I’ve stood on the Promenade here in Tramore, I’ve felt that Brooklyn Bridge and America were what were glittering on the horizon at the other side of the Atlantic Ocean.  By sheer coincidence, we now have a bustling beachfront restaurant on the Prom, called Brooklyn, with the bridge logo!

It would be impossible for me to leave Rod Figaro’s photograph of Brooklyn Bridge without highlighting the extent to which it is a bridge with a huge connection to poetry.  Here are a few lines from the great Walt Whitman poem “Crossing Brooklyn Ferry” which celebrates the exact spot where Brooklyn Bridge, which was completed in 1883, now stands.

The current rushing so swiftly, and swimming with me far away;
The others that are to follow me, the ties between me and them;
The certainty of others–the life, love, sight, hearing of others.

I sincerely hope that one day I will finally get to see Brooklyn Bridge with my very own eyes and meet Rod Figaro there to go on the photo-shoot he has so kindly promised.

The Festival of Bridges runs until October 31st. Submissions are now closed.