This photograph which I took a few days ago brings me to Claude Monet and from him to Dad.

See, it was during Summertime when I was 7 or 8 that Dad first introduced me to The National Art Gallery in Dublin. We used to swap houses with his sister, who lived in Dublin, and that was when we tended to visit places that Mother and Father loved.

It was Dad who was into art galleries and I adored going to them with him. Whenever he came to Dublin in the years that I lived there we would head for The National Gallery, view the art and then dine at leisure and chat contentedly.

He loved that he had passed on his enjoyment of art to me and could more than understand how I savoured going on guided Gallery tours on Sunday afternoons and taking a year long evening course in art history.

Every New Year’s Day for years and years, I gave him an Impressionist calendar which had its special place in his bolt hole.

How can one ever thank a parent enough for sowing the seeds of love for such precious things as creative arts and sport?

I guess one way is to try and pass on the love to future generations in a non-pushy way and hope that it will take root.

Railway stations stretch my mind. They are places of comings, goings, waitings, quietude, hecticity and evokers of emotion.

I was waiting at Waterford Station last night to collect son, Harry, off the Dublin train and, as always, my eyes were drawn to the timber clad signal box which dates back to 1906.

It’s almost impossible to think of all the trains, passengers, railway staff, people waiting to collect passengers or wave them goodbye who have been watched over by this distinctive building up on its metal support frame.

Similarly, how many people, like me, have a whole mixum-gatherum of memories that seem to live in this signal box which opens up each time they have occasion to be in around the station or simply passing by for fleeting moments.

Little did I ever imagine when I was being collected by my father at the station as a teenager, that one day I would be collecting a ‘child’ of mine!

It was only when I was driving into the station last night, after shrugging off hubby’s offer to go instead, that I remembered how my mother used to stress how much Father loved collecting us because he got to hear all the news on the drive back out to Tramore.

I nearly turned back to ‘let’ hubby go but it was just a nearly!

I put out a call for HELP  in late November as I was approaching the role of being the experienced driver to accompany our son who was about to start learning to drive.

Well, there was a bit of a delay but we are now four weeks into it and I’d like to thank you all for your words of advice and reassurance.

It’s proving to be quite enjoyable, much to my amazement, and it’s like we’ve developed a brand new bond. That’s not to say that there aren’t some hairy scary moments when I’m grinding my teeth and gripping my hands so tightly that the blood supply as well as my breathing stop.

What has surprised me most of all is how the colour yellow and my perceptions of it have changed very dramatically.

There was a time when yellow was about nature:

But now it’s all about road signs like this: 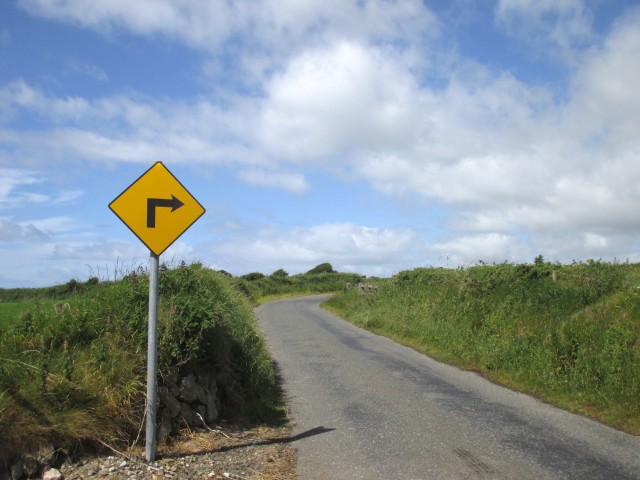 I’m looking forward to the day when yellow and driving look like this again:

Lovers’ Walk out by Newtown Wood here in Tramore is a place where voices echo because of the overhanging trees ~ trees that touch in the middle of the road like lovers holding hands.

Yesterday, there was a young couple out there with two children. The father was pushing a buggy in which I caught a glimpse of a baby with a pink bonnet. The mother was walking at pace trying to keep up with a little boy of three, at most, who was talking excitedly about a dog that was barking somewhere deep in the wood.

I had just passed them and was getting into my car when one of those unforgettable moments unfolded.  Both parents could obviously see that the little boy was bursting to go down the wood and just as they started to decide what they were going to do, I saw the father and son meet each other’s gaze out of sight of the mother and baby sister. The father signalled to the little guy in blue shorts to go on down the wood and then got further into negotiation with the mother about the detour.

‘Oh, we’ll just go down to the little bridge,’ he said with as much excitement in his voice as was on the boy’s face.

‘ Okay, but don’t stay down there too long, not like the last time.’ replied the mother as there was a quick exchange in which she took buggy with the crying baby and handed him the little boy’s tiny scooter.

The baby’s crying stopped as mother and daughter walked on with the mother talking animatedly about the now rustling of the still invisible dog.

Father and son ran together down the wood, laughing and talking about throwing sticks from  the bridge into the little stream that meets the sea at the bottom of the wood.

Every instinct told me that the father, just like me, had happy, happy memories of his own childhood days watching the stream carry the twigs under the bridge to start a whole new journey.