I’ve been fortunate enough to see many, many great sportsmen and women from a host of different types of sporting endeavour as my father did everything in his power to bring us see those who had reached the very top of their game. I’m talking here of people like Rod Laver, Bjorn Borg, Seve Ballesteros, Sonia O’Sullivan and I have huge admiration for that glorious combination of raw talent, hard work and determination.

In the last couple of years, I’ve been watching the blossoming of Waterford hurler, Austin Gleeson, who is raw talent personified and am absolutely thrilled that, at the tender age of 21, he has been designated Hurler of the Year in Ireland and well as Young Hurler of the Year.

Just take a look at this photograph of Austin Gleeson which I took at the homecoming of the victorious Waterford Under 21 All-Ireland winning team this year.

It’s hard to imagine that one so young could have the skill and talent that this guy displays on the field of play. When the sliotar (ball) comes near him the crowd becomes electrified because he has such touch and pure athleticism:

Austin Gleeson is Mr. Humility and never, ever fails to make the point that his team mates are every bit as important as he is to the teams on which he plays. He’s right, of course, but there is a recognition in the world of Gaelic games and beyond that we are looking at one of those rare talents that we may only see  a handful of times in our lives: hurlers like Christy Ring, Jimmy Doyle, Jimmy Barry-Murphy, Nicky English, D.J Carey, Henry Shefflin, Ken McGrath and John Mullane.

So, it’s a night when the Waterford Hurling Anthem is echoing all around me and I simply can’t stop smiling and hoping that we’ll have many, many more happy days cheering Aussie and the lads on the great hurling pitches of Ireland.

I don’t expect this post to mean much to many people ~ unless, of course, they are Waterford (Deise) people with a passion for hurling.

Hurling is a Gaelic game that’s arguably the fastest, most skilful game in the whole wide world. It’s played with a hurl made from ash and a small leather ball called a sliotar. There’s fifteen on each team and the games last for 70 minutes and are not for the faint-hearted either on or off the pitch.

The highlight of the hurling year is the All-Ireland Championship which is in full swing at the moment. Today, we had two quarter-finals: Waterford v Wexford and Galway v Clare.

Waterford were victorious and will take on the might of Co. Kilkenny in two weeks time. Kilkenny are recognised as the kings of hurling in Ireland but we live in hope that we will find a way to weave ourselves passed them and head into the All-Ireland Final and beyond.

After the match this afternoon, there was a lightness about the Co. Waterford that greeted me. Waterford colours are blue and white and these were the colours that were emblazoned everywhere I looked.

Yes, I AM a proud Waterford woman and am beaming here as I write this!

There’s a splendid handball alley in the quaint village of Stradbally here in Co. Waterford and I often stop there on summer evenings and think.

Handball is one of the Gaelic Games in Ireland, alongside Gaelic Football, Hurling and Camogie. It is a game of amazing speed and skill, with a long history. One of its greatest fascinations for me lies in its rawness ~ hitting a ball against a wall with the hand or fist.

My father, who grew up in West Clare in the 1920s and 30s, played lots of handball in the alley in Kilrush. It was a real gathering place in the Summer and the gang took turns to play. There was a grassy spot above the alley where spectators congregated.

Playing handball late into a Summer’s evening and lazing about on the dewy grass afterwards was a life-changer for Dad when he was fourteen. He ended up getting pneumonia at a time before antibiotics and almost lost his life.

Not surprisingly, this experience made him very wary of sitting on damp grass or the like ~ something that was drilled into us as kids.

As I sat on the grass above the alley in Stradbally recently, I couldn’t but giggle as I remembered an evening when I was about fourteen and had gone out in a newly washed pair of jeans. Dad got it into his head that they MUST be damp and spent hours driving around looking for me to take me home immediately.

I got in ahead of him and  just about lived to tell the tale!

‘For all who come my grave to see, avoid damp beds and think of me.’

I have the utmost admiration for John Mullane, the inspirational Waterford hurler, who announced his retirement from Inter-County hurling this week. He is a man who gave his all to Waterford hurling, wore his heart on his blue and white sleeve and gave us magic moments in which we saw raw talent and flair. When you talk about John Mullane, you talk about a player who ignited stadiums with his speed, skill and sheer passion.  You also talk about a man who poured his humble  soul into inspiring a whole generation of  Waterford youngsters with a deep, deep love of the game. He is so generous with his time and makes every young player feel special.

I will never, ever forget being on the Quay in Waterford in 2008 for the Waterford Team’s homecoming having been defeated in the All-Ireland Final in 2008. To see John Mullane sobbing was heart-breaking as ‘ Don’t Stop Believin’ ,  the Waterford anthem,  echoed right around the county. He felt he had let us all down; we knew that he would die for Waterford.  He was a fundamental part of  so many great Waterford games  that gave us such memories ~ playing alongside the likes of Ken McGrath, Paul Flynn, Dan Shanahan , Tony Browne, Eoin Kelly, Michael Brick Walshe ….

John Mullane, you will never, ever know how you lifted our Waterford hearts as you shot up the field and scored from impossible angles.  Thanks for the glorious memories.

Co. Waterford is my native heath and the place where I have now lived for the last 21 years.  I often write about aspects of the county which has incredible natural beauty and a depth of history and heritage that is a sociologist’s dream.

The time that I feel most able to think and write about Co. Waterford as a whole is when the hurlers are doing well in the All-Ireland Championship and that moment is right now!  In just over a week’s time, July 15th, Co. Waterford takes on the might of Co. Tipperary in the Munster Final.  Nothing galvanises Co. Waterford more, as an entity, than when the hurlers are  leading the way. We move from thoughts of  Waterford City as opposed to the rest of the county (as the Census defines us) or from the East/West Waterford divide to Co. Waterford as one – all waving the same blue and white flag.  There is great awareness and banter about Waterford’s county boundaries and for these weeks no one is in any doubt where the lines are. 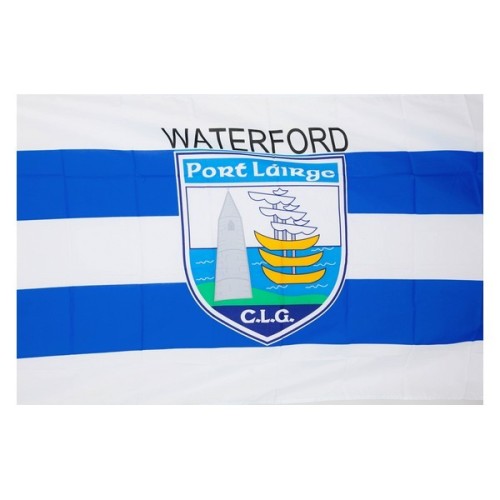 I got great insight into how hurling  passions can really bring county blood to a boil when my father, at the age of 76, made his way from Waterford to Croke Park  in 1995 to see his beloved Co. Clare win the All-Ireland for the first time in his life. I swear that the tears of joy he shed over that victory were blue and saffron.

Last  night I headed for Walsh Park in Waterford City to see the team prepare for the ‘big day.’  I knew that I was surrounded by people from all over the county and the players hailed from clubs from the length and breath of  The Deise (Co. Waterford’s nickname).  The Senior Team had a practice game again the Waterford Under 21 players and there was an air of quiet, determined focus among  the players, management  and spectators.

No one was getting too excited;  it’s like we are in a valley between the gut-wrenching tension of the last five minutes of the semi-final against Co. Clare a few weeks ago  http://www.youtube.com/watch?v=VLaIjlXqOAc and what we know will be an adrenalin-pumper against Co. Tipperary on sunday week.

As I was leaving Walsh Park, I couldn’t but notice a colourful board hanging just inside the turnstiles. It captured in a picture what I have been feeling for years now since Waterford have been having glorious hurling years.  Here was a big Waterford crest and the crests of the 55 clubs from all around the county. This was like a pack of  55 cards but, for now, they are all in the same Blue and White Box of Co. Waterford which sings Don’t Stop Believing!