A really good friend of mine has long said to me that ‘old friends are best.’ and I am inclined to agree with her. It’s hard to beat that feeling that you can say just about anything to a person and they will understand where you are coming from and listen, even if they don’t agree with what you have to say. Also, with ‘old friends’ there is a knowing that either of you can call at any time of the night or day and a helping hand or listening ear will be automatic.

To have even one such friend is wonderful and to have a three or four is to be steeped in good fortune.

This song Amigos Para Siempre always makes me think of the specialness of friends and long-standing friendships which are based on mutual respect , caring and love.

I have no idea why it is that Lockdown has re-opened my love of duets. It’s like I can’t quite cope with bands or choirs but want to hear more than one voice.

Here’s one that brings me back to an evening many moons ago when I uttered a version of the main line from this song and in so doing kept a friendship alive that I have no doubt would otherwise have fizzled out without me ever realising the potential that it had and the joy which it would ultimately bring.

A friend of mine died very suddenly recently and it hit me in ways I find hard to articulate.

We were around the same age, were pregnant at the very same time, met regularly, shared a lot of experiences, were like-minded in many ways and had a shared passion for the sea.

I keep thinking that I see her and find myself on the verge of waving or heading over to talk to her only to realise that my subconscious is playing tricks with me.

I so wanted to give her lovely daughter a hug but couldn’t because of the times we live in. I’m not a huggy person at all but this was different.

I know she wouldn’t want tears; she wanted people to be happy and went out of her way to listen, support and understand. But tears have a way of forming, just like dew drops at dusk.

It’s best to think of her impish smile and heartfelt chuckle. They will stay with me forever and what about it if I wave at a stranger. They’d more than likely have been through the very same experience and no doubt you have too.

Remember me when I am gone away

Gone far away into the silent land;

There are many milestones associated with losing elderly parents and the last few days have brought one to the fore for me. It involves the death of a woman who knew my parents for a lot longer than I did.

She knew my father from when he first came to Waterford in 1943. She was a few years younger than him but they shared a great love of sport and he got to know her parents, sibs, boyfriends, her eventual husband and kids. He often spoke of how, by chance, he happened to be with her the night her mother died and how ‘being a shoulder to cry on’ had been very significant in sealing  their friendship for life.

This woman was really warm and friendly and was very welcoming to my mother when she arrived in Waterford to marry father. She was also always very kind to us kids and was interested in all our comings and goings.

After Mother and Father died in 2009 and 2010 respectively, I loved meeting her and having a chat. Her memory was excellent and she regaled me with stories about Father, especially, going back to his single days. It felt so good to know that there were people, like her, who remembered my parents when they were in their prime and who wanted to reminisce about the times they shared.

It was a shock to hear that she had died. Somewhere deep down, I think I thought that she would live forever as she had such a youthful way about her and never seemed to have aged physically in my eyes.

It feels like a wrench ~ both in terms of a bridge being knocked between me and my parents and in terms of the significant friendship that we had developed in our own right, especially over the last decade or so.

Obviously, my heart goes out to her grown-up children who meant the world to her but whom I don’t know. I intend to make it my business to get to know them now!

Mount Congreve Gardens served up special beauty on its last open days for this season.

Standing deep in the woods, I was treated to this piece of abstract art that has been shimmering around in my mind.

It seems all the more poignant today as I’ve just come back from visiting a life long friend who has dementia. Her short term memory may be impaired but so much of her layered essence remains. Her smile, her voice, her sense of fun, her memories of days we shared and most of all the feel of her hand in mine.

Where does the image take you?

I’ve been acutely aware since I started this blog that the Tramore Beach I love with such a passion is a place that spells absolute sadness for others. The families of the four crew members who were killed in the horrific Irish Air Corps helicopter crash on July 2, 1999 tend to be foremost in my mind in this context and I suspect this is because hardly a day goes by that I don’t pass the hauntingly beautiful monument which was erected in their memory on the Promenade here in Tramore.

Back in 2012, I wrote a post about the four brave men who died on that fateful night on their way back from a Rescue Mission Tramore Remembers Brave Air Corps Helicopter Crew.  It was a post that received no ‘public’ attention at the time but it is one that touched the heart of a great friend of one of the crew, Captain David O’Flaherty, who, for me,  up to that point was one of the four names poignantly carved on the monument:

This short comment from Rory, which I received on a dark evening back in January, has opened a door into the wonderful person and handsome face behind these 9 words:

Hi Jean, True heroes of Ireland, as are all the men and women of the Air Corps and Coast Guard. Captain David O’Flaherty was my best friend and I miss him very dearly….. 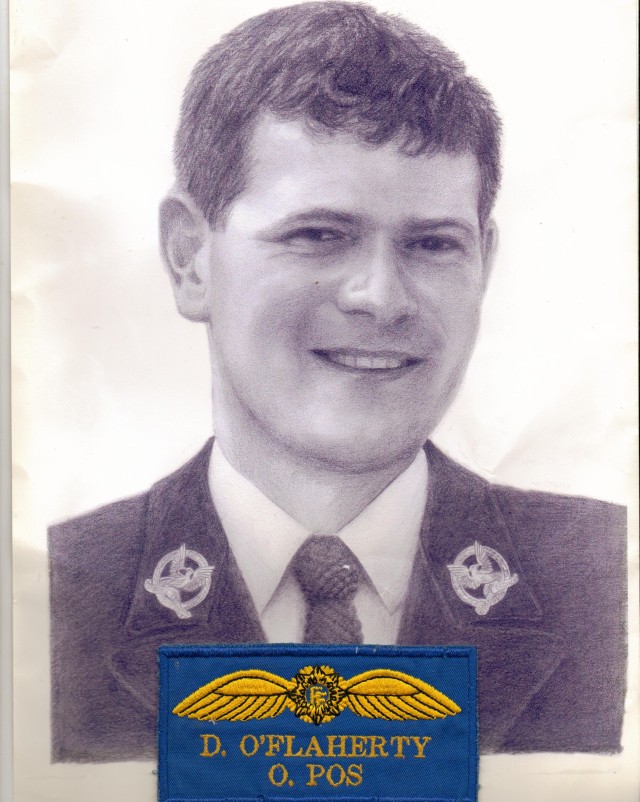 Rory and I have exchanged many emails since January and it transpires that he and David had been friends since early childhood. Here’s an insight into the depth of their friendship and the way their lives were interwoven.

David and I were best buds in school. We went on a trip to London (by ourselves) when we were 14  and went to an air show in Hendon, London. After that he wanted to be a Pilot.
David went to UCD with my wife (my girlfriend at the time) to do a science degree and was recruited into the Cadets in the Curragh immediately.
David and Maria got married in Baldonnel and what a brilliant day that was …..

Maria was 3 months pregnant (so was my wife) when the lads were killed so he never got to see his beautiful daughter …..

This year marks the 15th Anniversary of the tragic helicopter crash in Tramore and I feel honoured to have been able to ‘get to know’  Captain David O’Flaherty through his loyal friend. Interestingly, when I asked Rory if there was a song or poem or some words that he associated with David, his response was in the form of the motto of the Irish Air Corps Search and Rescue Service:

“Go Mairidís beo”, (That Others May Live)

I love when people spring surprises and the other day I arrived home to find that my first Christmas present had been hand delivered and was sitting comfortably on the doorstep in the daffodil bulb container that I’d emptied the day before with hope of Spring colour. 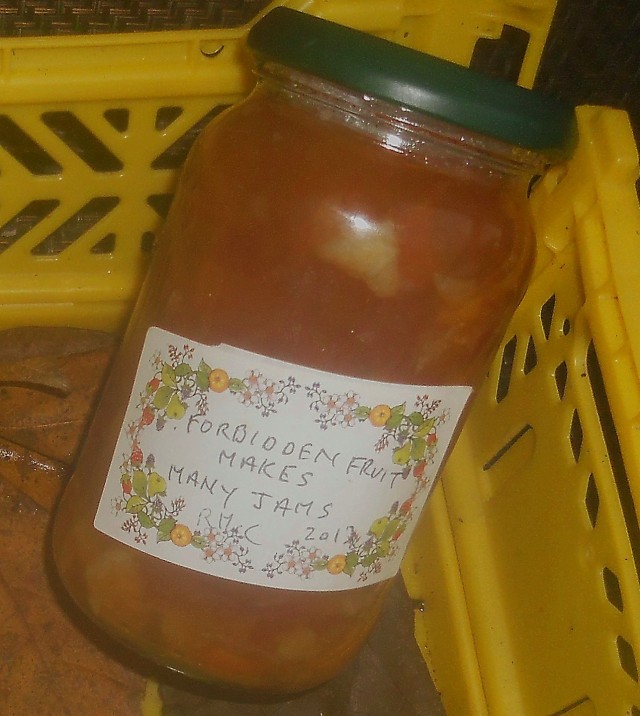 R. Mc C epitomises the saying: Old Friends are Best!  We go back more years than I can even remember with tennis as our lowest common denominator. But this is a man of many parts with arguably more interests than anyone I know. These are interests that span the whole spectrum from sport to travel to the arts, gardening, cooking, debate, conversation, learning, laughing, living, and, as you can see, giving …..

The marmalade is exactly what you’d expect from someone with such a vast range of interests with fruity flavours mingling and holding a tight-roped balance between the sweet and tangy.

I’ve taken to having a generous spoon of it with morning muesli and each day brings fresh thoughts of times shared with R Mc C ~ doing battle in mixed doubles on tennis courts the length and breadth of Munster; driving home at all hours of the morning from a great tennis weekend in Galway and getting a puncture along the way right outside a house with a tennis court; consorting at the Immrama Travel Writers’ Festival in Lismore; receiving  post cards from countries so far flung that they could hardly be found in my atlas; sharing highs and lows of Waterford hurling …..

Forbidden Fruit surely does make many jams … excuse me while I dip into the pot again and contemplate this wisdom as well as the magic of  trusted friendship, courtesy of R. Mc C.

I only realised today that Van and Bob came into my life on the same day, October 5th, 2011.

No, I’m not talking about Van Morrison and Bob Dylan. Rather,  I’m referring to two American men who connected with me through the poetry thread that I started on Linkedin back in late September, 2011, and who are  pillars of  ongoing fun, support, sensitivity and sheer friendship.

This pair have been instrumental in introducing me to all sorts of creative works and in deepening my love for others. Van has a huge interest in Mark Twain, who was such a part of my growing up, and he has also sprung the most delicious surprises on the poetry thread, like bringing me to the poetry, as well as the songs, of Leonard Cohen.

Knowing of my love for bridges, Bob sent me this photograph for The Festival of Colour, Creatvity and Connection:

It doesn’t surprise me in the least that it’s a bit surreal as Bob loves to stretch minds and emotions. I reckon this is the teacher coming out in him as well as the multi-layered man that he is.

So with Thanksgiving looming, I want to send special thanks to Van and Bob for lending such colour to my life and for knowing how to make me smile. This is for you!

The world is mud-luscious and puddle-wonderful.