I have a fascination for bridges of all descriptions and was completely captivated last week by Madam’s Bridge in Fethard, Co. Tipperary. The very name had me asking all sorts of questions before I even saw the bridge. Who was Madam? I still don’t know but am hoping to be enlightened soon.

Madam’s Bridge is one of those bridges that you could just cross and miss its beauty. It is at the Clonmel side of Fethard and spans the Clashawley River. As I was looking for a way to get down to the river bank to view the bridge from beneath, I took a look over  its left arm and was greeted by what could only be called a Monet-like vista of wild flowers.

Walking down- river on what was one of the hottest days of the year, I came upon a group a youngsters who were jumping into the river with splashes and laughter that could have been from any era.

That walk from Madam’s Bridge brought me  to the stunning walls of Fethard that were built in medieval times and which have been lovingly restored over the last few decades. They stand tall among the treasures of Ireland.

Fethard village has an abundance of charm and it is impossible to think of it without referring to  world-famous Coolmore Stud which is just a couple of miles out the road.  As I had been driving into Fethard and over what I hadn’t realised was Madam’s Bridge,  I was caught behind a huge tractor with a trailer piled high with bales of hay which were raining down on my car as they brushed against the hedges.  I badly wanted a photograph of this golden rain and followed the trailer out the road. Yes, it brought me to Coolmore with all its splendour.

But back at Madam’s Bridge, I felt I had so much to learn about Fethard and its history as well as its everyday activity now. There will be an opportunity to savour even more of Fethard in the coming days during the Fethard Medieval Festival 2012 which runs from August 15th-19th. 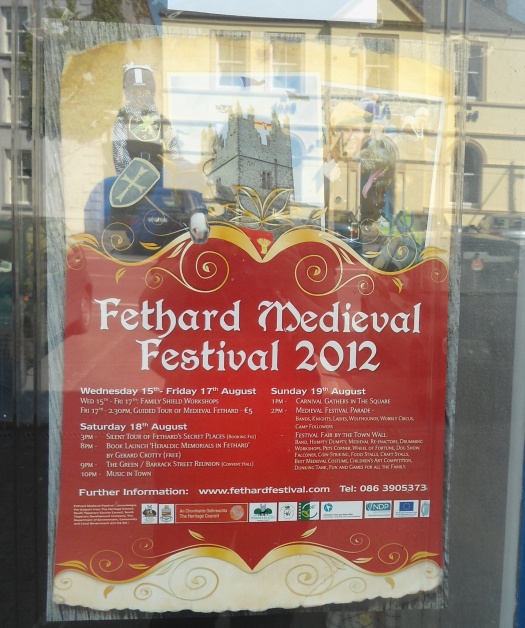