There’s something about stolen long evenings in Co. Waterford that wraps me up in sweet tranquillity.

Last Saturday, I felt the need to feast my eyes after too much screenery and found myself chasing the last of the light out along the Copper Coast. It was a dullish evening but I knew that there would be beauty if I let it find me.

Bonmahon Beach was deserted save for one young man making his way into the sea for one last swim:

The Yeatsian sky ~ ‘Had I the heaven’s embroidered cloths…’ mirrored on the sand like a painting laid out to dry:

Bonmahon, like so many other cities, towns and villages across Europe, was engrossed in the EURO 2016 quarter final game between Italy and Germany and I met just one walker when I stopped to savour the setting sun. We said our ‘hellos’ and and agreed that it was a great evening to be out:

The bleating of sheep rang through the salt air and I thought of those days in Spring when I was out searching for the first lambs of the year:

It was very heaven to see the curtains of the day closing over the Comeragh Mountains:

Back home the screen was flickering and tensions were high as the penalty shoot-out saw the Italian dream fade and German joy rise.

No one noticed that I’d not been there for the whole match and that’s how I wanted it to be!

Here’s how it was out along the Copper Coast here in Co. Waterford today ~ seapinked and blue: 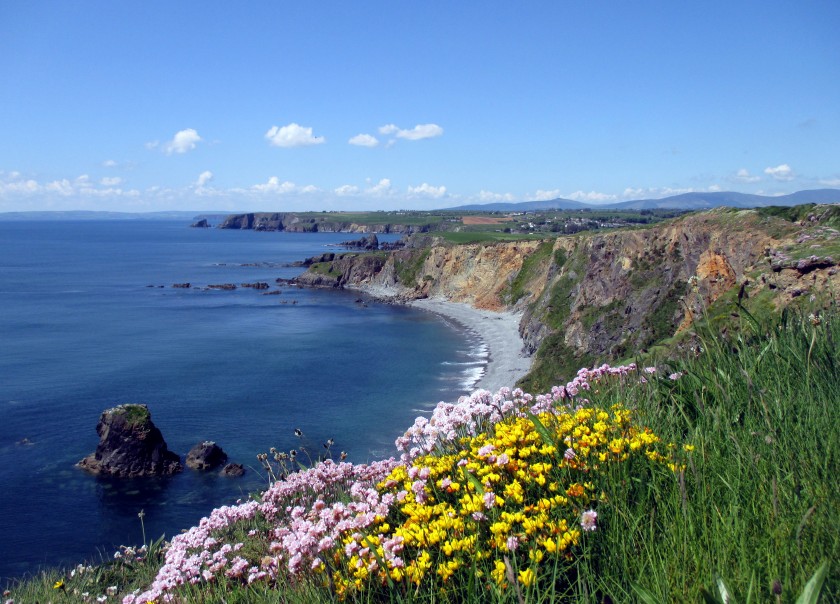 What bliss to drive out along the Copper Coast here in Co. Waterford this morning and glimpse the first of the sea pinks heralding the coming of Summer!

As I lay on my tummy gazing down on the blue, blue sea, the heat of the sun was massaging my back. The tide was as low, as low, could be revealing beaches and little coves carved into the coastline.

Snuggled up with the sea pinks, I could hear Summer waiting to come in on the next high tide.

Tides are high here in Co. Waterford these times. I could spend hours just watching the waves.

I took this photograph over the harbour wall out at Boat Strand yesterday morning. I must admit to feeling a little seasick as I look at it now even though I felt absolutely wonderful when I was actually there to witness the sea in all her glory.

How does it grab you?

I might as well admit that I have been dreading Easter Weekend this year as it marks 100 years since the Easter Rising here in Ireland. I realise that The Easter Rising probably means little or nothing to most people who don’t have some strong connection with Ireland but I can tell you that it has HUGE connotations for those of us who do.

The Easter Rising was a rebellion aimed at securing independence from British rule. It was a relatively small affair led by a number of visionaries which failed to achieve its aims BUT it was very significant in terms of setting in train the momentum which led to the War of Independence and the eventual signing of the contentious Treaty in 1921 which led to the setting up of the Irish Republic ~ which includes 26 of the 32 counties on the Island of Ireland. This contention then led to a very bitter Civil War within the Republic in the early 1920s and later to the Northern Troubles which erupted in 1969 and prevailed very bitterly until the 1998 Peace Agreement.

That’s my reading of The Easter Rising anyway and there are definitely many different readings of it. It’s important to recognise that the Easter Rising took place during World War I and many Irish people were part of the British Army.

Given all this (and lots more that I haven’t mentioned), you can imagine how all sorts of differing attitudes to the Easter Rising have become embedded in the hearts and minds of all those whose lives have been touched by the legacies of anything associated with that uprising in 1916.

Coming into today, I felt that emotions were still too raw to have big Centenary Commemorations/Celebrations. So, it was with great trepidation that I watched the State Commemoration on television a few hours ago. It was held in Dublin and involved: a wreath laying ceremony for those who died during the Rising; a reading of the Proclamation which was signed by the leaders of the Rising who were executed in 1916; a beautifully composed prayer which looked to our past, present and future in what seemed like a very broadminded, inclusive, pacifist way; and a parade in which all the security and emergency services of the Irish Republic were represented.

There were no speeches and just watching the proceedings, I found myself relaxing and feeling a wave of hope sweep over me as groups like the Irish Army, Police Force, Air Corps, Naval Service, Civil Defence, Coast Guard filed passed with immense dignity.

The discussions on the television indicated that Ireland is coming of age in terms of being able to discuss our history, as well as our current social, economic, religious, and political situations and aspirations in a mature, civilised way.

So, I write this post with a great feeling of warmth about being Irish and with a huge pride in this beautiful country of ours.

Here’s how my patch here in Co. Waterford was looking this afternoon:

Walking along the rocks, it seemed just right to come across this little vision:

Yesterday was some kind of a strange day here in Ireland and Jean was all over the place in every kind of way. She was up verrrrrrrrrrrrrry early, even before I was awake, and said we had to go out and get a sense of Ireland.

I was all for it but was a bit taken aback when she whizzed down Main Street and jumped out of the car and made for the pub that she always calls her very favourite in Tramore:

For a terrible minute, I thought she was going to head in there and leave me in the car for the day and maybe all night. But, thankfully, it wasn’t open ~ I don’t think anywhere was open at this stage.

Well, the beach was open and it felt great to be able to play ball and have the whole place to ourselves:

Instead of going home, we went on out the coast road and she juddered to a stop again when she saw that the daffodils were all yellowy on the road to Annestown. Must say, I like them too:

Next, she’s out in Bonmahon and pulling towels and stuff out of the back seat. I can’t believe my eyes when I see her taking off her clothes and dashing into the sea that looked like a big roll of tin foil. I was certain I’d never see her again and just stood in a tizzy blinded by the glare.

She’d written something on the sand before she went in but I couldn’t read it:

I got her home eventually and she said that she’d have to take a photo of me trying to have  snooze after all that roller-coastering.

I don’t know if I was dreaming or not but it seemed like there was music and horns and stuff making an awful racket when I was sleeping in the sun under the kitchen table. I haven’t a clue what that was about. But when we went out again, I did notice a lot of people wearing HUGE green hats and it seemed like lots of them had grown plants on their jackets.

Yes, we went out again and this time my Dada was with us. He’s as terrified as cliffs as I am and the pair of us cuddled up when she disappeared all excited trying to ‘catch the sun’ out on the Copper Coast. This is what it looked like to me ~ a massive big ball rolling right at me:

I needed to get all this off my chest ‘cos I’m afraid I might be going to have a few nightmares. I’m all sleepy now and hoping that tomorrow will be more like normal.

Here’s what I’m going to try and dream about:

My late father was a stickler for correct grammar and for consulting the dictionary, if in any doubt. Given all this, it was a source of fascination to me that he never used the phrase ‘somewhere else.’ Instead, he would say ‘some other where.’

Some other where has deep meanings for me (and I think I can see now why Dad used it.)

The time that some other where comes into play for me most is around sunset when  it’s dark and I’m pushing out the boundaries in terms of not being home. You know that extra half an hour or three quarters of an hour when they’d be expecting you back and have just started to wonder if the car has conked out or if Puppy Stan has gone missing or … It’s not quite time to start trying to phone but they know that the phone is probably on Silent anyway!

Well, the some other where is invariably on a beach wave-gazing; or high up on the cliffs cloud-gazing. Some other where is a timeless place; a place of oneness with nature; a place  where the air is salty. It’s also a place where you lose yourself; you move so far into reality that you are experiencing rather than rationalising. Some other where is intensely peaceful; it loves shapes, shadows and silhouettes and it can see right through darkness to a where that’s neither here not there, just beyond or in-between.

This is how my some other where has been looking in the last little while:

Do you have a ‘some other where?’

Today has been one of those sensual Sundays when you feel that nature is striving to shock, soothe and soul-search all at the same time.

I guess we needed a day like this here in Ireland with all the upheaval going on in the background as the General Election count goes on and on and political uncertainty hangs in the air.

I had lambs on my mind as I drove towards the Copper Coast searching the fields for new arrivals. The sky looked uncertain as I left Tramore and soon a snowy vista opened up in front of me as the Comeragh Mountains, which look down on the sea,  were well powdered:

The sea itself was basking under blue, blue skies and the tall cliffs at Benvoy Beach were in deep reflection:

Near Bonmahon, I found the peaceful bleating and gentleness that I had been craving. It swept me out of time and into a warm, woolly world of whispering and playfulness.

What more could anyone ask for?

Co. Waterford was beautifully dressed this morning and I couldn’t but think of these lines from W.B. Yeats:

Here’s a little glimpse of how it was: 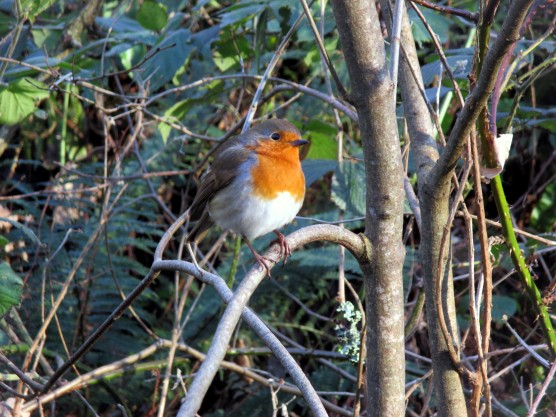 Icing on the Comeragh Mountains 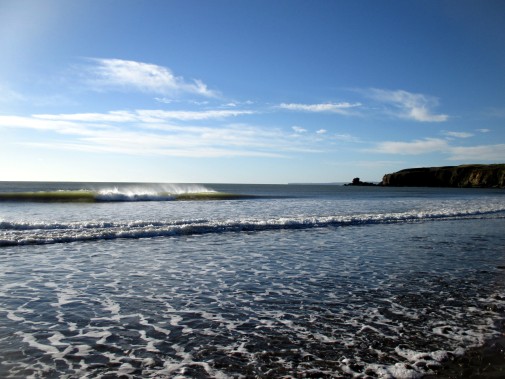 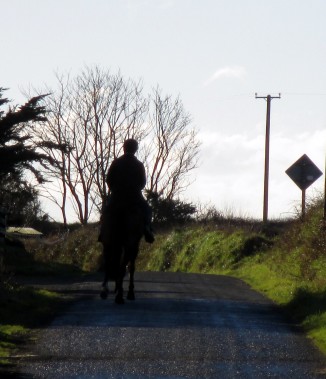 The Road to the Sea

There are times when you need to take little detours in life  to find textured space and this morning’s, for us,  was down to Ballydowane Bay, which is between Bonmahon and Stradbally,  here in Co. Waterford.

The steep cliffs were a mosaic, set against the deep blue January sky:

The only marks ahead of me on the pebbly beach were  Pup Friday’s:

With each step, our gaze was captivated by the layers and layers of different textures and the mingling of soft green grass on the rose-tinted sandstone.

All the glorious space that we needed to replenish our souls:

Where are your favourite textured spaces?