It would be hard for most people to understand but I’ve been nearly afraid to take the main road from Tramore to Waterford in recent months because a whole army of diggers, dumpers and bright yellow demolition machines have been at work very close to a ramshackled old cottage that’s precious to me, even if no one else loves it. It’s one of six abandoned cottages on that road and the ‘works’ were happening just beside one and were heading towards the next one which is a few hundred yards away. (Here’s a post I wrote about the six cottages back in 2014).

A lot of the time, I’ve been taking the back road so that I wouldn’t have to see a ‘gap’ where the cottage has lived for a lot longer than I have. And, I haven’t had the courage to ask any of the workmen what the plans are for the cottage.

Anyway, it looks like I can breathe again as the most endangered cottage is still standing in the clearing and looks like it is secure. I thought that St. Stephen’s Day would be a nice quiet day to take some photos. It was quieter than usual but there was still lots of traffic. One car even pulled over and the man driving it asked if my car was broken down. (That’s one of the things I love about Ireland ~ there are plenty of Good Samaritans around the place.)

Anyway, here’s a few shots of  ‘my cottage’ as it looked this morning:

It’s when I get up very close to the cottage that I feel its history. Today I was thinking about all the Christmases this little house must have seen and I wondered about the openings and closings of the front door ~ family and visitors coming and going. Were there floral curtains on the window or net ones or shutters or blinds …. who looked out the window and what did they see?

I’ve been hoping that the little cottage will be spared but today when I was right up beside it, I suddenly remembered that ‘spéir’ in the Irish language (and pronounced the same as ‘spare’) means ‘sky.’ To be ‘amuigh faoin spéir’ means to be ‘out under the sky’ and this is exactly what my cottage is now. The thing is that  I’ve always thought of ‘amuigh faoin spéir’ in a really positive way ~ like being released from captivity.

And just in case you were wondering, here’s how the cottage just up the road was looking: 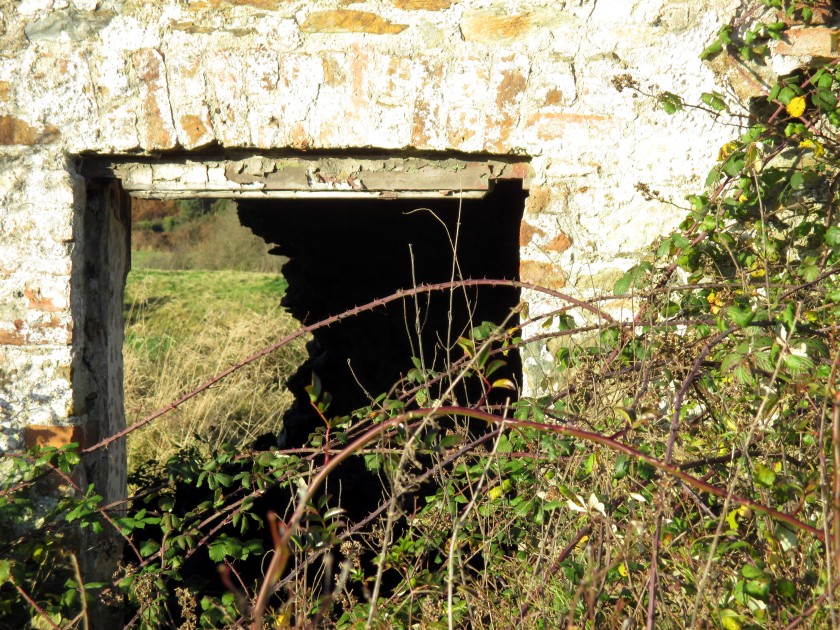 25 thoughts on “The Sparing”