Back in 1983, I was fortunate enough to spend three months in San Francisco as a Graduate student at the University of California in S.F. While there was plenty of study, I managed to find lots of time to visit Golden Gate Park which was close to where I was staying and at the weekends I used to walk down to the Bay and treat myself to coffee and cake at The Cliff House.  Believe it or not, I didn’t take one photograph while I was over there.

Years on, I was browsing in Jackson’s antique shop in Waterford and happened upon two postcards in a box on the counter. They whisked me back to those surreal months and the places I had fallen for: Golden Gate Park

and, yes, The Cliff House:

I’ve had the postcards stashed away for ages now but questions about their history have played around in my subconsciousness.

One of the cards is very legible and was sent from 1206 Florida Street, San Francisco to 59 Lower Yellow Road, Waterford, Ireland. 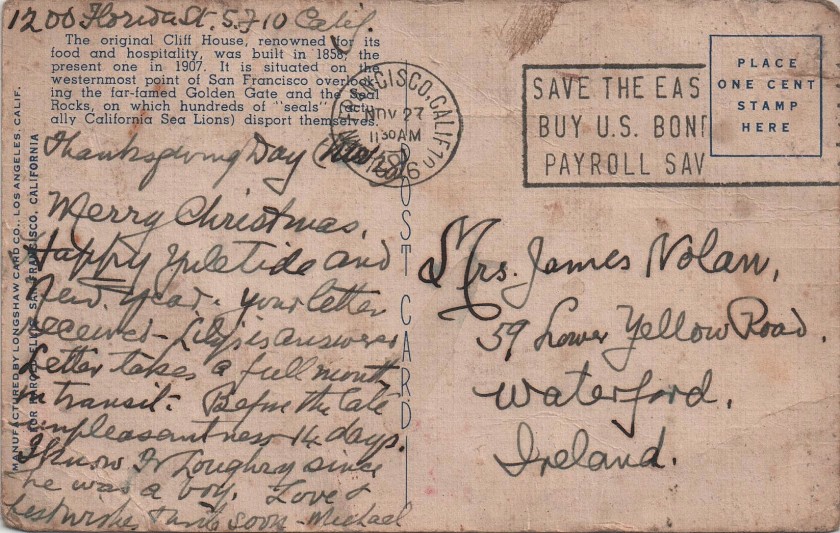 It doesn’t surprise me that the stamp has been removed from the postcard as foreign stamps had great appeal even in my childhood. The fact that it was 1 cent for the stamp suggests, from my research, that the card was sent sometime between 1919 and 1952.

Here in Waterford, a trip to take a look at  59 Lower Yellow Road the other day brought something of a surprise. Here’s how it looks now:

Number 59 is to the left as we look at the building which is now Calvary Waterford Christian Church and prior to that it was a pub. I’m still in the throes of trying to find out if and when it was a residence of the Nolan family.

I was rather taken by an old postbox on The Lower Yellow Road and had visions of Mrs Nolan perhaps posting letters to San Francisco from there, though a visit to the Post Office might have been necessary.

The view of Lower Yellow Road from No. 59 looks like this:

So many questions ~ so many memories ~ and what of 1206 Florida Street in San Francisco? Perhaps somebody will help me fill in the gaps at both sides of the Atlantic.

Meanwhile, one has to wonder if many postcards are being sent from San Fran to Waterford these days or is it all Skype, texts, Facebook and the like?

32 thoughts on “From San Francisco to Waterford”