Waterford City is the oldest city in Ireland and there are times when I love to just soak back into the past when I go in there from my home in Tramore ~ just 8 miles away.

This morning was one of those occasions and I strolled around with echoes from hundreds of years ago sounding everywhere.

This plaque is on the wall of Jordan’s Bar on the Quay.

Jordan’s itself is over 300 years old and has been in the hands of the Jordan family now for 70 years. It served as a boarding house, The Parade Hotel, as well as a bar for many years.

Andy Jordan is a man with a passion for history and the interior of the bar has wonderful worn wood that goes back into the mists of time.

Jordan’s is known as an American Bar and this is not because it is trying to emulate any US establishment. Rather, it is because it was once a place where people could buy tickets for the boat to America. They would first get a boat from Waterford to Southhampton in England and from there board a ship to America. For most, this was a one way journey.

Lots of things in Jordan’s caught my eye including this print of Waterford in the days before cars: 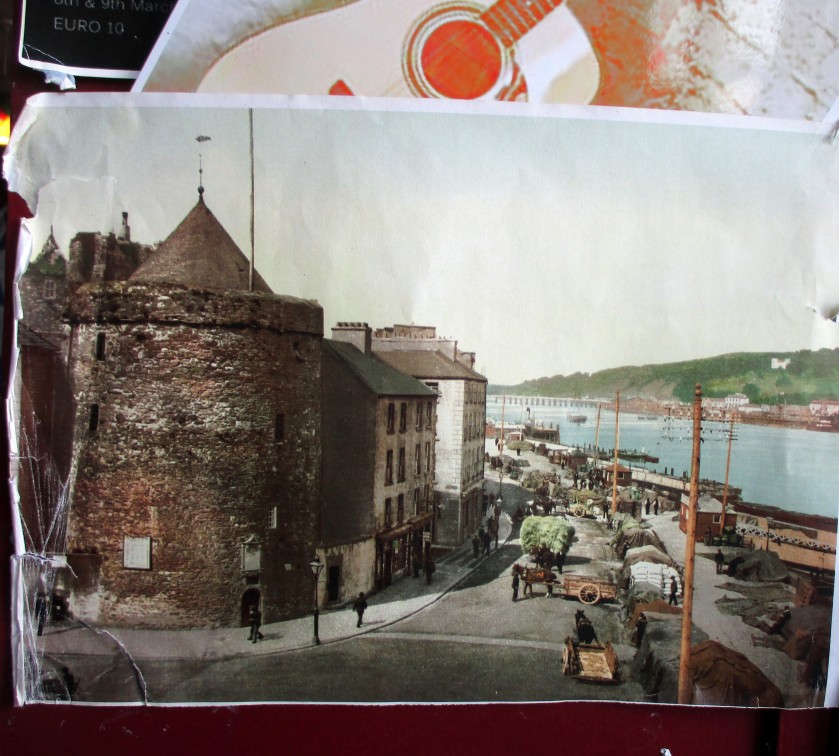 Andy Jordan pointed out two very interesting aspects relating to this print. It is derived from the well-known A.H. Poole Collection of Photography which operated from Waterford between 1884 and 1954. The building in the foreground is Reginald’s Tower (built in 1003) and the A.H. Poole business operated out of the building next to that. The bridge at the end of the Quay was a wooden bridge, known as Timbertoes, and, according to Andy Jordan, it is said that the pieces of wood from the bridge were used in a number of different premises around the City when it was dismantled in 1910, having spanned the River Suir since 1794.

Waterford City was buzzing with both locals and tourists today and there was also an air of excitement about the fact that the Waterford Hurling team were taking on the might of Co. Kilkenny (which begins for us just across the River Suir) in the Semi-Final of the All-Ireland Hurling Championship.

The game, which was a heart-stopping affair, ended in a draw so we’re drawing breath again until next Saturday evening!

31 thoughts on “Layers of History in Waterford City”